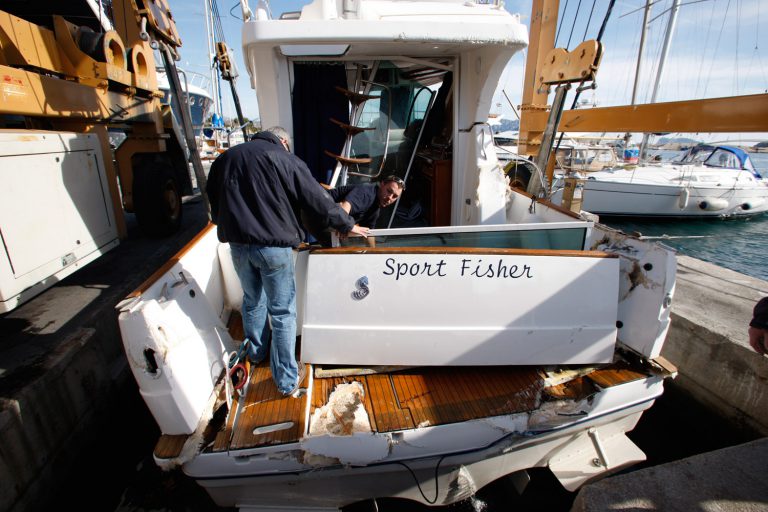 The footage (below) appeared on social media in the last few days, for me it brought back some unnerving memories. Anyone who’s seen it will be amazed that no one was killed. For me this video was like reliving March 3rd 2010, the day I was hit by a motorboat.

So what happened to me?

With a massive earth-moving jolt and a loud crack, I felt a pain in my back, something hit my head and I was thrown to the ground. Noise was everywhere, my yells, fibreglass being shredded and crushed, then the sound of water in my ears. Everything went dark. One thought rushed through my mind, I’m dead

One of my more spectacular claims to “fame” comes from being hit by a 42 foot motor boat, travelling at 30 knots. Most people within the industry have heard about a photographer that was hit by a boat, that photographer was me.

Before I go any further I’d like to clarify that the way I work is safe, when I’m controlling a shoot, I minimise risks. I’ll never ask the boat I’m shooting to head for the boat that I’m on. I’ll always ask them to pass to one side or another. Even during the wake crossing shots, where the subject crosses the wake of the photo boat, there is little risk because the subject is running at the same speed as the photo boat, so when she turns she loses speed and is turning away from the photo boat. If the subject boat is on the nippy side I’ll ask them to accelerate past the photo boat, across her wake to get some air, but again she is never heading for me, or the boat I’m on. So, while a boat may appear in my photographs to point directly at me, it’s not travelling towards me.

One of my more spectacular claims to “fame” comes from being hit by a 42 foot motor boat, travelling at 30 knots

I’d been shooting from the prime position on the flybridge for the past two photo sessions, photographing the Beneteau Monte Carlo 42 and the Antares 42, as well as the Flyer 650, so for this third session I decided to shoot from the cockpit of our photoboat, an Antares 9.80, to get some low level shots of the boats I had already photographed, but primarily I was on the water that afternoon to get running shots of the Antares 30.

The wind had picked up from the west since the morning, so in the afternoon the fleet headed to the east of the islands off Marseille for a bit of shelter. The sky was blue and, out of the breeze, it was warm. Both the Antares 42 and Monte Carlo 42 has done a couple of high-speed passes at a distance, I was shooting on a longish 70-200mm lens. Because I’d already shot these boats I was letting the other photographers run the shoot, happy to shoot whatever went past until I could get pics I wanted of the Antares 30. The Swift Trawler 34 went past on my right, and it looked good next to the castle, we were stationary in the water, and the sun was shining, it was a good day.

A few seconds later (9 seconds according to the time on my camera) I saw the Monte Carlo was making a run towards us, so started shooting her. Click, click, click, I shot 7 shots in the space of 3 seconds, I noticed she was still heading straight for us. She was at full speed and was filling the height of the frame. When my lens reached it stops and stopped zooming out I realised something was a miss, I thought the driver, a freelance journalist not from IPC/Time Inc, had mis-judged the turn and we were going to get a face full of water. I turned to protect my camera from the water, as I was doing this, the other photographer with me in the cockpit shouted “He’s going to hit us!”.

“A bit of an overreaction”, I thought, experience has told me time and time again that I’ll just get wet. The rush of water slapping under the hull was getting louder. As I glanced back, all I saw the bow of the boat. The white and blue-grey of the hull and two anchor locker drains at eye level.

Before I could move – not that there was anywhere to run to – there was a tremendous crunch. The cockpit jarred violently, something hard and unforgiving hit my head. I felt a sharp pain in my back. I shouted. I was in water. Everything faded to black. “I’m dead” I thought, “this is it.”

However, I was still thinking. Dead people don’t think, or do they? “I don’t want to die” is the next thing I can remember then I remember thinking no one is going to survive that. I could hear and feel water around me. Was I in the water? What happened to the boat? I didn’t know. I can’t remember breathing or holding my breath, but after what felt like minutes, the darkness faded into white and azure blue with bubbles, small, tiny, fizzy bubbles in front of my eyes. I blinked and I could see the sky. I’m ALIVE! I was actually alive! The face of the other photographer was looking down at me.

What had happened? I got up from the deck and looked around me, my head hurt, my back was tender, the scene around me was of devastation and carnage. To my right and the other photographer was there, next to the ladder that was no longer attached to the flybridge. He was wet and covered in white bits of snow like gelcoat, I got up, I was euphoric, I was alive. The other guy looked shaken, but I was smiling and so happy to be there, I shook his hand and said “we’re alive”. I looked around in disbelief. The two sides of the transom bulwarks were wobbling around, the back of the transom was pushed forward, and the stern was completely open. There was shattered safety glass everywhere. Bits of torn, crushed and ripped GRP littered the scene. I had blood on my hand, and antifoul on my jacket – It is beyond words how lucky I was to be alive that day.

The other photographer said “Mayday, mayday, we must call mayday”. The hatch from the flybridge opened, another photographer looked down and saw the devastation and asked if everyone was alright? The skipper then tried to come down the steps but finding they were loose climbed over the side of the flybridge. Trying to get inside, he pulled the glass door away and put it where I had been standing. But the other door was jammed into the saloon ceiling so he squeezed passed and went to look below, then came rushing back. We were sinking!

Luckily the engines were still running, and we were near Port Du Frioul, a marina on the east side of Ile Ratonneau. On the way to the port, the other photographer was trying to get his camera bag, but the flybridge had trapped one of the straps in the force of the impact. Five minutes after the collision we were in the marina.

Boat owners shouted at us to slow down, until they saw what had happened. The skipper tried to manoeuvre the damaged Antares into the travel hoist. But at the mouth of the dock the engines cut out and we bumped into a moored yacht, our pulpit getting caught on one of their stanchions. I went to help another photographer, and we managed to free her. The marina launch was then able to push us towards the waiting hoist and we were lifted clear of the water. As I walked back to the cockpit to get my kit together my back started to hurt more and more. I was helped off the boat, and got some photographs of the damage, before being helped onto the waiting Monte Carlo 47. I lay on the saloon floor as the boat rushed back to Marseille and a waiting ambulance. Five hours, four x-rays, one MRI scan and some intravenous painkillers later, the hospital was able to confirm that I hadn’t fractured a vertebrae, and it was just very badly bruised.

The next day I went to the marina to see the Monte Carlo 42, the damage to her port guardrails and topside ran along 37 feet out of her 42. The only thing that could have caused the damage at that height, was the flybridge of the photo boat. Above where I had been standing.

From what we can gather, the bow of the Monte Carlo hit above the starboard trim tab while turning hard to starboard. the gouge behind the man in the cockpit above the port trim tab was made by the outdrive propellers, both bulwarks were folded by the weight of the boat on top of it. The hull had also split and water can be seen coming out of the crack in the centre of the transom. I was standing behind where it says ‘Fisher’.

Behind the scenes Photography
Matterport Vs High-resolution 360° tours
5 things to look for when choosing a 360° photographer
I can supply photography, 360-degree tours and video to promote your company and help you sell more
Contact Graham
+44 (0) 7966 469186
graham.snook@grahamsnook.com
© Graham Snook Photography 2023
Privacy Policy
We use cookies on our website to give you the most relevant experience by remembering your preferences and repeat visits. By clicking “Accept All”, you consent to the use of ALL the cookies. However, you may visit "Cookie Settings" to provide a controlled consent.
Cookie SettingsAccept All
Manage consent