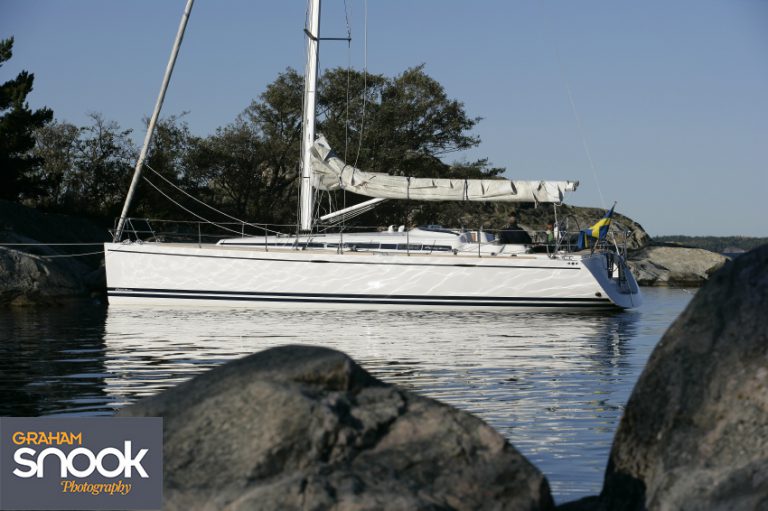 This Arcona 430 was a shoot for Yachting Monthly in the Stockholm archipelago. A powerful yacht with looks to match her performance, she was beautiful inside and out and she went on to win European yacht of the year in 2009 in the performance cruiser category.

This was the first day of a two-day shoot, and the first boat to be tested in the 24-hour boat test series, and what better way to start it? We arrived in Stockholm on a chilly October evening. The sun was out by the time we got to the boat after a factory visit the next morning. Although there was a chill in the air, the sun was doing its best to dispel it.

Two-day boat tests tend to be a bit more relaxed. I don’t have to cram sailing shots, on-board sailing shots, interiors, 360s and video into the one day that Chris Beeson is trying to test the boat – while a vocal photographer is telling him to put his notepad down and look at the camera! Chris and I have a great working relationship, we met long before our time at IPC. He was the sailing editor at Allsport Photography, I worked in the darkroom. He was my best man at my wedding and we have spent many hours sailing, travelling and drinking together. There aren’t many jobs where someone can honestly say they work with their friends, not colleagues. But I could at Yachting Monthly.

The morning consisted of some upwind sailing work, followed by a run with the spinnaker before a lunch stop, then more sailing in the afternoon to reach our anchorage for the night. We motored from the factory, hoisted sails and I set about shooting Chris putting the Arcona through her paces. Sometimes shooting stills, others shooting video.

Before long it was time for lunch, the photo boat went in first and I got photos of the Arcona mooring up where I wanted her to: the sun on the hull and a pretty background. I took a few shots on the way around to meet up with the Arcona and her crew for lunch. Out of the breeze and in the sunshine it was actually quite warm, or very warm considering we were in Sweden in October. As soon as lunch was over I hopped ashore to get some more shots of the Arcona at anchor. I went around the water’s edge shooting. I find some photographs work better when there is some depth to them, something close in the foreground that you have to look past to see the subject, then something beyond the subject. This little visual tool can work really well, rather than just shooting the boat where she is. I found these two typically Swedish rounded rocks to put in the foreground, metered for the highlights – which I know to be about 1/500th at f8 at 100 ISO on a sunny day on the water. I wanted to stop down a bit to get a little detail in the rocks and water, and because they were right in front of me I didn’t need a wide aperture to throw them out of focus enough to add the depth.

With the shot taken from a few slightly different angles and in a vertical orientation, I went into the trees behind to get some wider angle images of the Arcona in the bay. This was a mistake.

Lying in wait in the trees was a vicious predator, waiting to feed on any innocent pray that came within biting distance, or as was the case was me! I’m not sure what it is about me, or in particular my body that makes it so irresistible. Irresistible to anything flying and biting that is, not the opposite sex. Before I knew it, I was bitten by one mosquito, then another. My flapping around obviously woke more of the little…how shall I put it?…insects? The temptation of foreign food on their menu, was too much for them to refuse. I’ll suffer for my art as much as the next man, but with the shots in the bag I wasn’t suffering anymore! I ran back to the boat, as fast as a photographer with cameras can. It felt like Indiana Jones running for safety but probably looked to those on-board like a flailing chimpanzee doing an improvised expressive dance with accompanying sound effects.

With a couple of bites starting to swell, I delved into my bag for my bite stick (Yes getting bitten happens so often I take an ammonia bite stick on foreign shoots). We soon cast off, just three of us on-board: Tony, Arcona’s UK agent, Chris and myself. The photo boat went back to base and we stayed out on the Arcona sailing for the rest of the afternoon and evening, before finding another idyllic anchorage. Idyllic to look at, not to go into, a submerged rock at its entrance brought us to a swift halt. They say there are two types of sailor in Sweden: those that have hit a rock, and those that are going to! Minutes later on approach to the shore and anchorage, with darkness upon us Chris would put his spiderman skills to the test, by jumping ashore with the bow lines. It’s safe to say Chis is no spiderman. He disappeared into the darkness, followed by a murmured “erugh”. Tony and I looked at each other, no sign of his head torch. We called out, and heard a somewhat muffled reply. Tony went forward, I was on the helm. The red and green of the navigation light illuminating nothing but rocks and trees ashore.

Seconds ticked by, nothing from Tony or Chris, until a dark figure moped up to a tree passed a line around it and sulked back to the boat.

Chris had leapt in a gallant fashion into the air, and onto a smooth Swedish rock. Then, with the grace and poise of Wile E. Coyote when Roadrunner has stepped to one side at the top of a cliff – leaving Wile E. in mid air – Chris was left scrabbling on the rock before his inevitable slide into the Baltic.

With nothing worse than wet clothes and waterlogged pride to cope with, we settled down to an evening on-board.

The full review of the test can be read here on Arcona’s website.

Behind the scenes
Sweden Yachting Photography
Camera focus explained
Colour balance explained – Using a custom white balance
I can supply photography, 360-degree tours and video to promote your company and help you sell more
Contact Graham
+44 (0) 7966 469186
graham.snook@grahamsnook.com
© Graham Snook Photography 2023
Privacy Policy
We use cookies on our website to give you the most relevant experience by remembering your preferences and repeat visits. By clicking “Accept All”, you consent to the use of ALL the cookies. However, you may visit "Cookie Settings" to provide a controlled consent.
Cookie SettingsAccept All
Manage consent