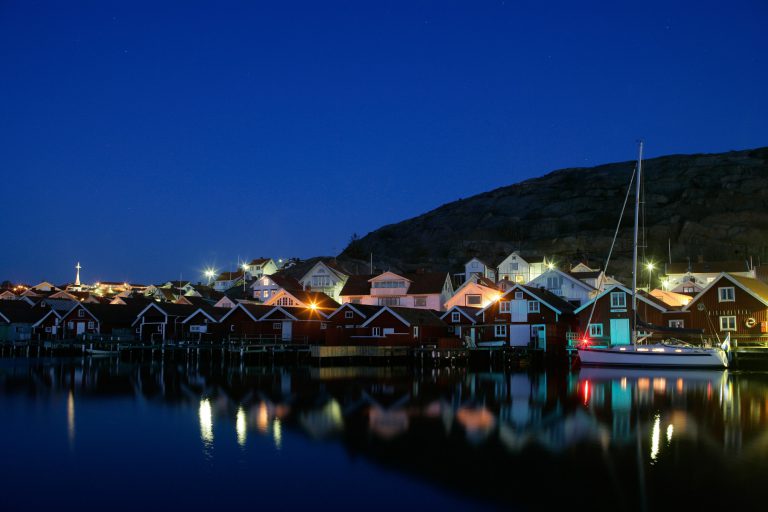 Sweden in February was cold, -10 degrees celsius to be exact. Ice surrounded the boat when we arrived, it formed on the boat while we were sailing and now we were tied up at the jetty, pontoons and water around the boat were all starting to freeze over. Nothing in Hunnebostrand was open, by 5pm the sun was starting to set, and by 5:45 it had gone completely.

It might sound a strange thing for a photographer to say, but I quite like taking photographs in the dark, it gives a surreal feel to the images and I know how the darkness and a long shutter speed can transform a good image into a really good image.

I wanted to capture the Hallberg Rassy 372 in a typically Swedish setting, the cross above the town had caught my eye as we approached Hunnebostrand. As evening approached the lights around the two were switching on, and the cross was illuminated. Opposite where we were moored was a rickety pontoon. I walked gingerly down the gangplank, ice had already covered the damp wood, just before I reached the bottom gravity gained the advantage and I landed squarely on my bum, my tripod landing next to me. Not the best start to a photograph.

Ideally, for night-time work, a solid platform is needed so the camera is totally still, but the pontoon was the only place I could get the angle, there was no wind, so I thought it would work. And it did. I used a 20-second shutter speed, taken at around 6pm when it looked dark to the human eye, but the long shutter speed brings out detail in the sky, the lovely rich blue, and even a few stars. Looking closely at the image you can see ice forming on the water around her stern. After about 30 minutes of shooting the sky had turned black, it was time to get up the slippy gangplank and back to the boat for an Akvavit.

Behind the scenes
Yachting Photography
Keep the horizon horizontal
Keeping a lens clean – The best lens cloth?
I can supply photography, 360-degree tours and video to promote your company and help you sell more
Contact Graham
+44 (0) 7966 469186
graham.snook@grahamsnook.com
© Graham Snook Photography 2022
Privacy Policy
We use cookies on our website to give you the most relevant experience by remembering your preferences and repeat visits. By clicking “Accept All”, you consent to the use of ALL the cookies. However, you may visit "Cookie Settings" to provide a controlled consent.
Cookie SettingsAccept All
Manage consent