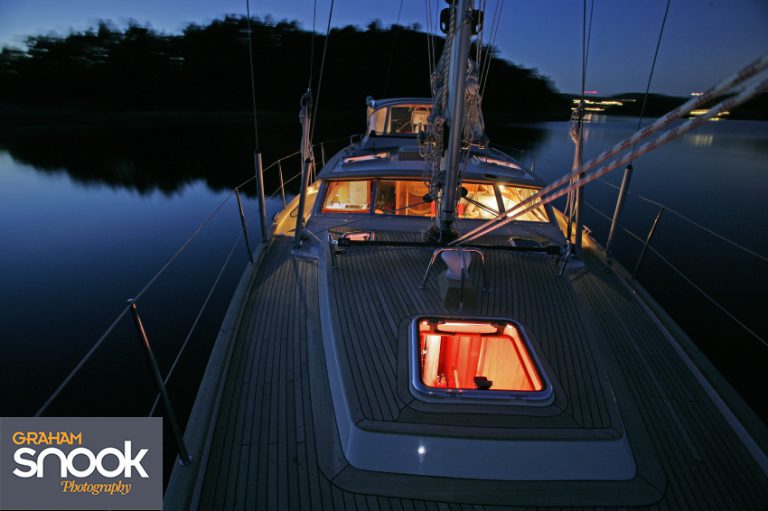 Sweden is known for its high quality boats, but it’s surprising that most of them are made on one island, Orust. It’s home to Hallberg Rassy, Malö, Najad, CR Yachts, Sweden Yachts and Regina. Although some are in limbo, they all produced solid sea going boats, well thought out, with beautiful teak joinery that was irresistible to caress as you moved around down below.

The main town, Henån, is home to a boat building college, where many shipwrights learn their trade, but follow the road to Uddevalla and tucked away at the north of the Orust is a tied island called Vindö. Here you’ll find the family run company Regina. The father, who owns and set up the company, can often be found in the workshop making wooden coat hangers for the boats in build. It’s that sort of small company, the sons now run the business and the dad enjoys working with wood so much he can’t leave it alone.

We were there to do a 24 hours test for Yachting Monthly on the Regina 40. Like all the other Reginas being built today, she’s a deck saloon, but a proper one; when you’re sitting in the saloon you can look out of the windows, not just normal boat with big coachroof windows.

After a busy day sailing we anchored for the night, and after going up the mast for a few shots, we cooked a meal, put the cockpit tent up and relaxed on board. As the sun went down the breeze faded away to zephyrs. While Chris Beeson was reading below I went on deck to take in the atmosphere. As good as it is to be undercover, or nice and toasty down below, it’s also nice to sit on the deck and reflect every now and again. Taking in the evening, the quiet surroundings, watching the sun’s light fade then a quick check of the anchor and back down below.

It was after checking the anchor that I turned and saw this shot, the lights from inside looked so warm and there was enough light still in the sky. I got Chris to switch on all the lights, as I went below to get my camera, flash and tripod.

Back on deck I set up the tripod, the shutter speed was already coming in at 30 seconds, which was needed to get the colour in the sky. I didn’t want to use a high ISO because in long shutter speeds it can cause noise – unwanted spots and colours in shadow areas. The camera I was using at the time offered good results up to about ISO400, so the smallest aperture I could get was f5.6, not ideal, but a minute-long shutter speed would have captured too much movement.

The tripod was on the boat so the deck would remain sharp, (except for things that moved during the exposure – like the sheets) while she slowly moved at anchor the background blurred. Because there was no other source of light I used my flash on reduced power to bring out a bit of detail in the deck. I reduced the power to avoid the flash killing the atmosphere in the shot, while still trying to give the impression of moonlight.

It took a few test shots to get the correct balance of light and exposure, but that’s one of the great advantages of digital photography: you can tweak as you shoot.

Behind the scenes
Boat Test Regina Yachts Sweden Yachting Photography
How to release a stuck filter
Spare camera battery – Do I need one?

I can supply photography, 360-degree tours and video to promote your company and help you sell more
Contact Graham
+44 (0) 7966 469186
graham.snook@grahamsnook.com
© Graham Snook Photography 2023
Privacy Policy
We use cookies on our website to give you the most relevant experience by remembering your preferences and repeat visits. By clicking “Accept All”, you consent to the use of ALL the cookies. However, you may visit "Cookie Settings" to provide a controlled consent.
Cookie SettingsAccept All
Manage consent