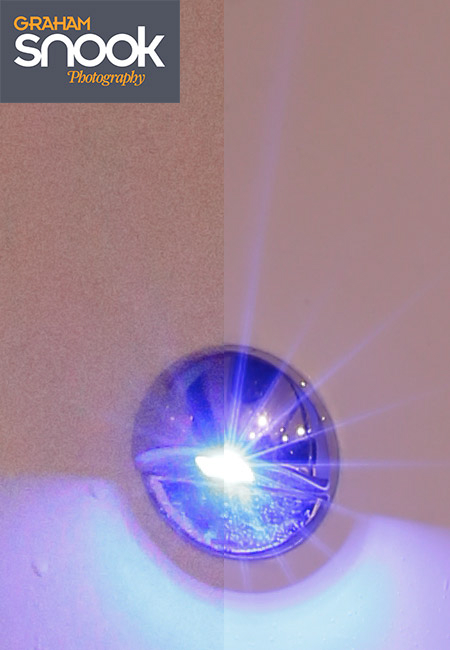 How can you improve a photograph in two minutes? Read on and I’ll tell you…Recently I’ve been pushing the boundaries of what would have been unusable or impossible in the days of film. With winter comes less light, and what light there is hangs around for less time. I’ve been shooting my daughter in ambient light, but not just daylight, under artificial light, and in some circumstances under very little light at all. I have to admit the results have been staggering. It seems overkill to use my professional equipment for family photographs, but it’s the only real time I get to experiment without cost to my reputation or a client’s images.

One disadvantage of digital cameras had always been their lack of ability to capture images in low light situations, actually, that’s not strictly true, they could capture them but the shadows could lack density, and the images suffered from noise.

Image noise is unwanted tiny blocks of primary colour (red, green and blue) which can sometimes give the appearance of film grain. It used to be the case that the camera couldn’t go above ISO of 400 without suffering from noise, then as technology advanced it would be ISO 800, now I can shoot images at an ISO of 12,800 and more.

Because the photos in my spare time are for me, I can afford to relax and try new things. One of the things that have got me excited is using auto ISO. Set the shutter speed and aperture, and the camera chooses the ISO, no matter how little light there is. It’s still not perfect because you can’t set the camera to over or under-expose, but this is apparently being addressed in a camera firmware update.

Where it is great is when the lighting in your environment is low and you want a certain aperture for depth of field and a high shutter speed to freeze action.

Above is my daughter playing around at lunch, the wide aperture isolates her from the background while the fast shutter speed freezes the moment and her expression.

By playing around and trying new things it’s improved my commercial work. A few weeks ago I was on assignment, covering how Sky Sports run their live outside broadcast units. Some of the shoot was inside the trailers of articulated lorries, with dim lighting and black walls I would usually have been reaching for my flash, not an option when 20 odd people inside are concentrating on 48 live camera feeds. Different parts inside the truck had different lighting, the predominant light was from the television monitors, the light output from which would vary depending on the subject matter being filmed. More England players in white on the screen, more light, more French in blue, less light. Taking an accurate light meter reading was almost impossible. So what do I do?

Luckily auto ISO was quick enough to adapt to the changing lighting conditions. Because of where the photographs were taken a little noise was to be expected, not ideal, but to get any images at all would have been unthinkable without a long shutter speed and a tripod 10 years ago.

All this is fair and well, but just because the camera can shoot at high ISO it doesn’t mean that it should always be used.

I’m a great believer in quality; the higher quality I can provide, the better. A few weeks ago I was shooting the Princess 43 for Motor Boats Monthly, by the time we were wrapping up it was dark, I was taking photos using high ISO to capture the night lights in the cockpit. The steps looked particularly good, so I took this shot:

Although it was good enough to be used in the magazine, I knew how good that photograph could look. So I reduced the ISO to 200, got out my tripod and set the image up again:

It took two minutes longer to set up the shot and adjust my camera’s settings, but the difference in image quality is immense. The tripod was needed for the longer shutter speed from the smaller aperture required for the starburst on the highlight. The whole image’s sharpness is much better, it would have been worth spending ten times as long to get that extra quality. The image is noise-free, and highlights crisp and clear, the starburst sharp and precise. Here you can see a direct comparison:

Being able to capture images of some subjects in little light is great if your subject is moving. But when it’s not, a little extra time spent creating images can obtain a far better image quality.  Just because the first image of the steps was good enough, it didn’t mean I should settle for it. The difference that two minutes make is clear to see, and when the difference is so marked, it would foolish not to spend the extra time creating superior photographs.

Hints and tips
Yachting Photography
A bad day in the office
The advantages of RAW Vs Jpg – Part 1- Colour depth
I can supply photography, 360-degree tours and video to promote your company and help you sell more
Contact Graham
+44 (0) 7966 469186
graham.snook@grahamsnook.com
© Graham Snook Photography 2023
Privacy Policy
We use cookies on our website to give you the most relevant experience by remembering your preferences and repeat visits. By clicking “Accept All”, you consent to the use of ALL the cookies. However, you may visit "Cookie Settings" to provide a controlled consent.
Cookie SettingsAccept All
Manage consent