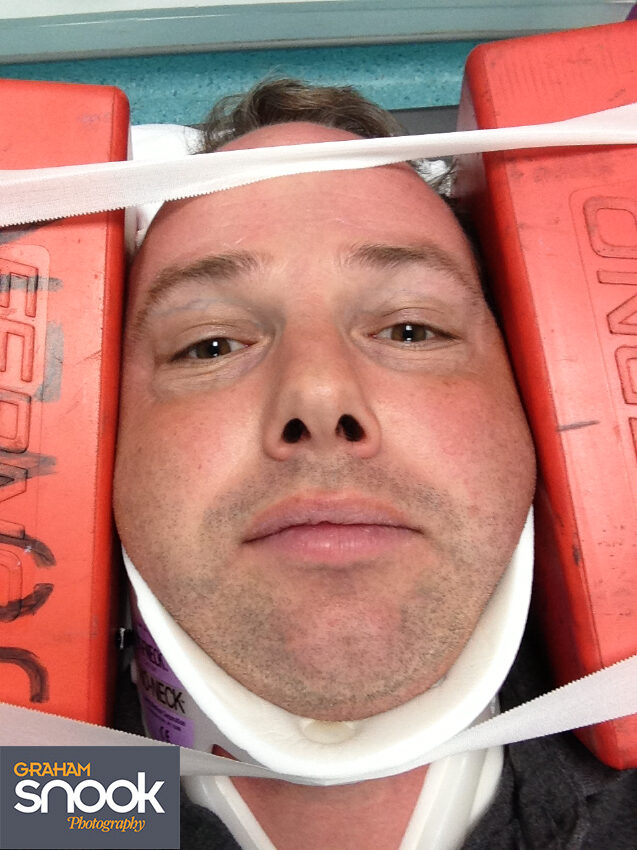 A bit of a different photo today; Me, yesterday.

Thursday didn’t quite go as I was expecting it to. It had been an uneventful morning, I’d dropped my daughter off at nursery and was driving down to Lymington to photograph and write a boat test for Yachting Monthly. Somewhere south of Brockenhurst things started to go awry. The car infront of me was turning right, so had stopped to wait for a break in the traffic to cross over. I stopped, the van behind me stopped. The car in front crossed the road and I was about to pull away when BANG!

My head went forward, my sunglasses were thrown off the top of my head and my car was now coasting forwards with without the engine on. The car was telling me there was a malfunction in the restraint system, and it put on the hazard lights, clever things these BMWs.

What had just happened? Had my airbag malfunctioned and exploded before vanishing into thin air? I got out of the car, the guy in the van behind got out too, both of us were rubbing our necks as we asked each other if we were alright. We walked to the back of his slightly shorter van where the reason for our confusion lay. A car has gone into the back of the van, the van had gone into me. The radiator of the car was steaming as it’s contents dribbled out onto the road, A pregnant lady got out and our concerns turned to her. The guy said he’d call the police, so I call my insurance company, then took some photos of the scene while we waited for the cavalry. Before the police arrived we were joined by a paramedic. The lady was was checked over, then we were examined. Because of the nature of a whiplash injury, and the chance of a cervical fracture, both the van driver and myself were immobilised; both wearing neck braces told to stand with our backs against his van and not to move. The police arrived and while the paramedic did their observations two police offices held us each by the neck braces against the van. To be on the safe side we’d have to go into hospital to be X-rayed. By this time two ambulances had arrived, and another police car, to sort the traffic out while the two original offices had their hands full supporting our necks.

I was manoeuvred onto a spinal board and from then on all I could see was directly above me, still with the brace on, my head was taped in position and I was taken onboard the ambulance. My heart rate was checked, however being the hair bodied person I am the electrodes weren’t reading properly. John, one of the ambulance crew, shaved patches on my chest to connect the monitor to. So far I’d had a police woman holding me by the neck, and now big hairy bloke was shaving my chest. There are some things you think will never happen to you, but there you go.

The accident happened around 9:40, the paramedic had me in a brace by 10:00, and by 11:00 I was on my way to Southampton General Hospital where I was to remain looking upwards for the next 3 hours. Unable to move because I was still taped in position and only able to see the ceiling tiles it made me aware of how much, as a photographer, I rely on visual information. I thrive on looking at things, seeing things, always looking around me, and for 3 hours this was taken away. Three hours might not sound like a lot, but when you’re alone with only have white ceiling tiles and florescent lights to look at, it feels like a lifetime.

Luckily I had my iPhone with me so I was able to take  a couple of photographs of my surroundings to see where I was, as I really had no idea. Lying on a trolley faces are all distorted, as you spend the time looking up peoples’ noses, under their ears and chin. Signs on the walls of the cubical are no good because I couldn’t turn my head to read them. I could hear the conversations around me, but not see who was speaking or where.

Thankfully after four X-rays, and no fractures seen, I was discharged.

Behind the scenes
The cheapest camera bag? An unlikely choice
Use a tripod or increase the ISO? – The results
I can supply photography, 360-degree tours and video to promote your company and help you sell more
Contact Graham
+44 (0) 7966 469186
graham.snook@grahamsnook.com
© Graham Snook Photography 2022
Privacy Policy
We use cookies on our website to give you the most relevant experience by remembering your preferences and repeat visits. By clicking “Accept All”, you consent to the use of ALL the cookies. However, you may visit "Cookie Settings" to provide a controlled consent.
Cookie SettingsAccept All
Manage consent