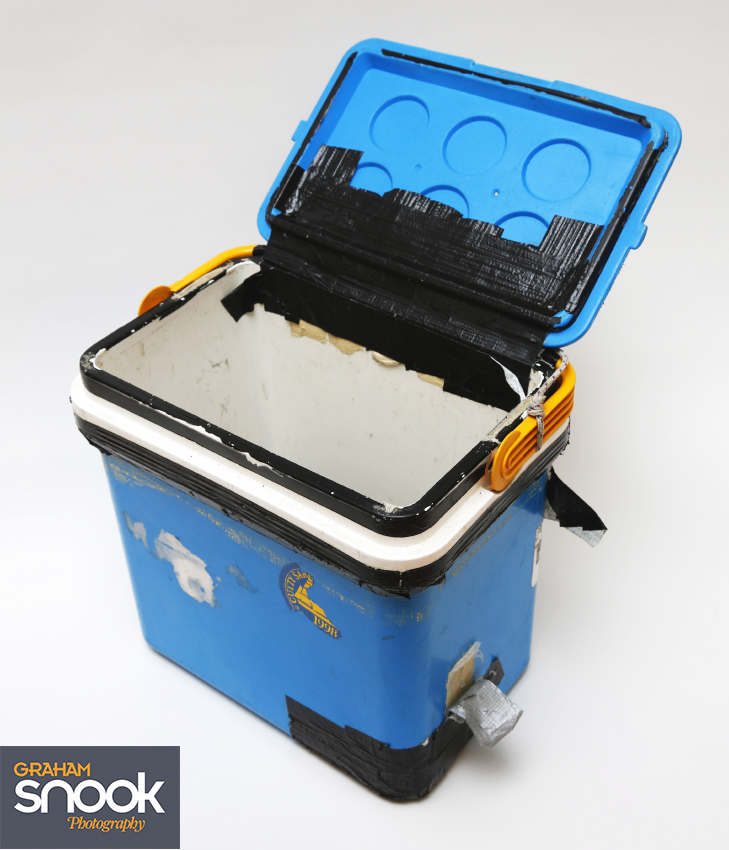 Apologies for the lack of Friday photos and Tuesday tips recently. It’s been a mad couple of weeks. Work before, during, and after the Southampton Boat Show has been intense. Producing videos, taking photographs, writing and organising boat tests, not to mention coordinating ways to get to the un-flyable parts of Eastern Europe!

It really has been a busy time for me. Not that I’m complaining. Busy is good, and since I started up Graham Snook Photography not a day has gone by since I’ve been sitting here twiddling my fingers wondering what to do. So on with today’s tip…

As a yachting photographer, I’m often asked how I keep my kit dry. After all, marine photographers are working on the water. Water and cameras don’t mix, the more they are separated the better. The simple way I keep my cameras dry is with a cool box. This isn’t some economy drive, although if you look closely at the photo you can see a sticker dating back to 1998! And contrary to many comments, it’s not my lunch box either! It’s simply because it’s the best case I’ve found for the job. As the old adage goes, if it ain’t broke, don’t fix it. So I haven’t. Photographing sailing isn’t always glamorous; sometimes it’s grey, wet, windy and horrible on the water, but even in the worst conditions my cool box has looked after my camera gear admirably.

I’ve owned this box since the early 90’s, the tape holding it together gets replaced every now and then, and I’ve taped one side of the lid closed to stop myself losing it over the side and added some cord to help keep the lid secure. But apart from that, it’s a regular £10 cool box. It’s waterproof and impact-resistant and as long as the lid is kept closed it should float, you could spend hundreds of pounds trying to find a case that does the same job!

Inside the base of the cool box is foam from a big Peli-case which is used to cushion the equipment and keep the cameras and spare batteries away from any water that does make it into the box. I usually keep a spare chamois leather in there to help cushion the cameras, and as a back-up if the one that I’m using takes a wave. It might not be a fashionable or stylish solution to keeping cameras dry. But it works.

You might not have the same amount of kit that I do, perhaps you have more, but the basic principle remains that you can’t take a photograph without a working camera.

If you’re into sailing or boating and you take your camera on or near the water, protect it the best you can. If it’s a compact camera or a digital SLR with one lens, you don’t need a cool box, just a suitably sized Tupperware box with some sponge foam or a scrunched-up polythene bag in the bottom. As long as the box is waterproof and the camera won’t sit in a puddle if any water does get in the box you should be fine. If you do have the urge to spend money on something other than Tuppaware, peli-case is the way forward.

Finally, if you will be taking your cameras out and about, make sure they are fully insured. Ruining a camera isn’t a way to end a day.

Hints and tips
Yachting Photography
Photographing the Round the Island Race in rough weather
A bad day in the office
I can supply photography, 360-degree tours and video to promote your company and help you sell more
Contact Graham
+44 (0) 7966 469186
graham.snook@grahamsnook.com
© Graham Snook Photography 2022
Privacy Policy
We use cookies on our website to give you the most relevant experience by remembering your preferences and repeat visits. By clicking “Accept All”, you consent to the use of ALL the cookies. However, you may visit "Cookie Settings" to provide a controlled consent.
Cookie SettingsAccept All
Manage consent