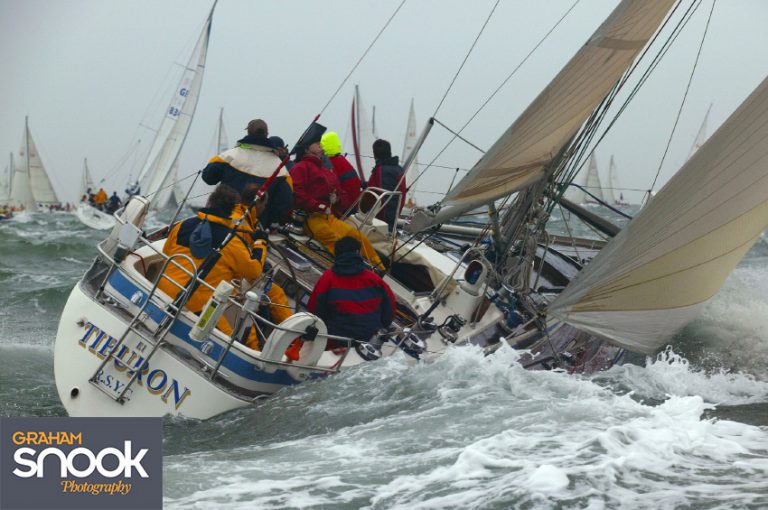 Taking yachting photographs on calm sunny days is easy, for me at least, taking sailing photographs in rough weather isn’t. A lot of the time when it’s rough the shoot is simply rescheduled for a better day, sailing looks more inviting, and it generally make superior images. There are of course times when a shoot can’t be bumped into the next week, due to publishing deadlines or the when the shoot in question is an event.

On a positive note if it is blowing old boots, and the yachting photographer can keep the spray off their cameras long enough to take photographs, the images can look great. But even a drop of water on the lens can turn a fantastic shot into wasted space on a memory card. The lens can be spotless one second, and get a wave full of spray the next.

Supplying any images taken through a wet lens isn’t an option in my book, an image is either technically good enough to put my name to, or it isn’t. There’s no middle ground – unless it really is a once-in-a-lifetime image, but thankfully I’ve never had to make that decision.

To clarify I’m not talking about semi-underwater photography here, I’m talking about sailing photographs taken above the water that should be crystal clear from the top of the frame to the bottom, and from the left to the right. As if the viewer was seeing the scene through their eyes, not through rain-covered glasses.

There are a number of methods I use to get yachting photographs when spray is coming at me from all angles. The first is to use chamois leather to wipe my lens again and again. Finding a dry bit of chamois is the hardest part as the day wears on. Before shooting I make sure the lens is spot (and smear) less. Then I can shoot downwind, always keeping my back to the wind, but this limits the angles I can shoot. I’ll either get a photograph full of topside, with just the heads of the crews visible or a head-on shot.

The next way is to accelerate past the boat and wait for her to sail past, trying to motor alongside in rough weather is a bumpy ride and just throws more spray into the mix; this invariably ends up on the lens. It is possible though if I keep my lens down, and “just” time it right. It sounds so easy, doesn’t it? “Just” looking ahead, seeing where the spray falls. Reading the sea to see where the photo boat will be by the time I’m ready to shoot, piece of cake! Well, it is if you’ve been doing it for years. Shooting into the wind is the hardest way, but it’s also the most rewarding as the shots look into the cockpit and along the line of the boat.

This was taken in the Needles channel in 2004, a far cry away from a couple of years later when there was sunshine and no wind (https://grahamsnook.com/right-place-right-time-for-me/). We were on the RIB by 5:30 to catch the boats coming down from Cowes. The maxi catamaran Orange II was trying to beat the speed record for sailing around the island, and we chased her for a few minutes on our way to Cowes until it was clear she was making ground on us. She missed out on the record by a few minutes, so she set off again without stopping!

This shot was taken as the majority of the fleet arrived at the Needles. It’s a good place for photographs as it’s a turning point and it has lots of tide, so the conditions can be rough. There are also lots of boats all crammed into one channel. Here the Swan 41, El Tiburon, is beating to windward. It was good force 5 at the time, with the wind against the tide. The sea was lumpy to say the least, wake from yachts, motorboats and lifeboats adding to the chaos of the sea and boats cross-tacking all over the place. Luckily Mat, my driver, was good and we had a couple of other people on board keeping Mat informed of any boats getting too close. Spotters are great to have as long as they keep their heads down, it means I can concentrate on taking photographs.

It was a grey wet day, with really flat light, but waves and the patterns of foam, and shape of the water frozen by a fast shutter speed make up for the lack of light. In spite of the lack of light it was a great day for taking photographs, almost everywhere were boats taking off from the tops of waves or ploughing through them throwing aside tons of water in the process. I like this shot because I feel part of the action, almost as if I’m on board.

Behind the scenes Photography
Round the Island Race Yachting Photography
Photographing the XSR48 superboat
The cheapest camera bag? An unlikely choice
I can supply photography, 360-degree tours and video to promote your company and help you sell more
Contact Graham
+44 (0) 7966 469186
graham.snook@grahamsnook.com
© Graham Snook Photography 2023
Privacy Policy
We use cookies on our website to give you the most relevant experience by remembering your preferences and repeat visits. By clicking “Accept All”, you consent to the use of ALL the cookies. However, you may visit "Cookie Settings" to provide a controlled consent.
Cookie SettingsAccept All
Manage consent