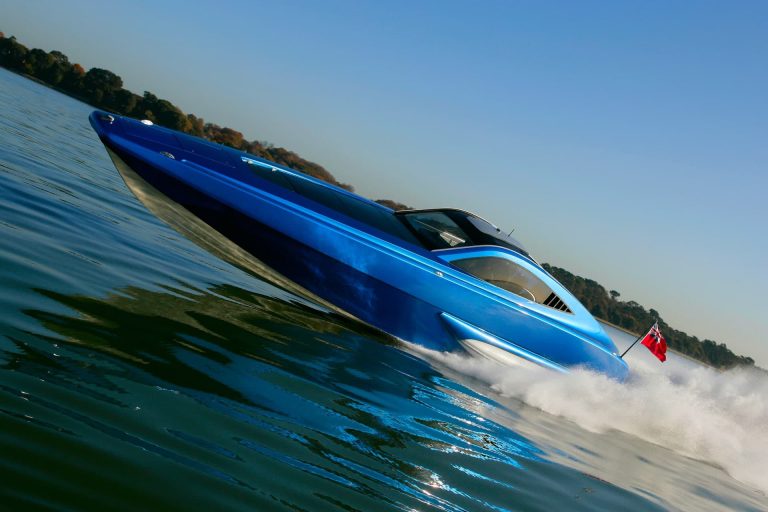 I love this shot. First off, the boat is the XS 48, billed as “a supercar on the water”. It took much of its styling above deck from the automotive industry, while the hull was designed by Fabio Buzzi. It was capable of over 80 knots, had a carbon fibre toilet and was the boat that James May won the Top Gear race in the south of France in. Breaking a camera and himself in the process, he won the race but it was a pyrrhic victory, and did little to sell the “comfort” that the company used in their tag line “Control, comfort and speed”. She was, however, the fastest diesel production boat at the time, and remains to my eye one of the most sleek-looking boats on the water.

Secondly, it breaks almost every photographic “rule”; slow shutter speed for capturing action, shooting into the sun, slanty horizon, and taking photographs at midday. But it just works.

The shoot was for SuperYacht World. It was a still morning when we headed out from XS’s Marchwood base onto Southampton Water to do the speed trials and get the photographs. It was a crisp cold November morning, but the light was great.

The problem with fast boats is that, unless you have a helicopter, almost any boat you get to photograph from won’t be able to keep up. Fast boats only really look their best when they are going flat out. I shot a number of runs, some wake crossing shots, and then some flying passes; where the photo boat remains stationary and the boat being photographed passes by.

Early on in the shoot, it was apparent that in order to get more exciting images I’d have to tilt the horizon. Horizontal lines are visually calming, and what she gained in length she lost in height. She was long and sleek, but to shoot her on the level made for uninspiring photographs that just looked like bands of different tones of blue. So I tilted the horizons and got the shots I needed.

We still had a bit of time so I tried some panning shots at a distance. By using a slower shutter speed and moving the camera you effective freeze the boat, but the blur the background with the motion of the camera. It works better for cars as they don’t bounce up and down like boats. The up-and-down motion of the boats can cause unwanted blur, so the technique can be a bit hit-and-miss.

With the panning shots at a distance in the can (or on the card) I got the XS to do some closer passes where I was able to use a wider angle 28 mm lens. I stopped down to f13, and slowed the shutter down to 1/125th of a second, the correct exposure when the sun was lighting her further through the turn. I follow-focused the boat as she approached and turned around us.

Just as she approached us, she hit the wake from one of her previous passes which lifted the bow up. With the light behind her, it semi-silhouetting the boat against the sun reflected off the water. The bow has motion but the helm has been frozen, while the water in the rooster tail and coming off the steps in the hull is nicely blurred.­­

While it might not have caught her technically perfectly, I think it captures the speed and emotion of the boat. More like an impressionist painting that an editorial photograph.

Behind the scenes
Motor Boat Photography Superyacht Photography Yachting Photography
Spare camera battery – Do I need one?
Photographing the Round the Island Race in rough weather

1 thought on “Photographing the XSR48 superboat”

I can supply photography, 360-degree tours and video to promote your company and help you sell more
Contact Graham
+44 (0) 7966 469186
graham.snook@grahamsnook.com
© Graham Snook Photography 2022
Privacy Policy
We use cookies on our website to give you the most relevant experience by remembering your preferences and repeat visits. By clicking “Accept All”, you consent to the use of ALL the cookies. However, you may visit "Cookie Settings" to provide a controlled consent.
Cookie SettingsAccept All
Manage consent