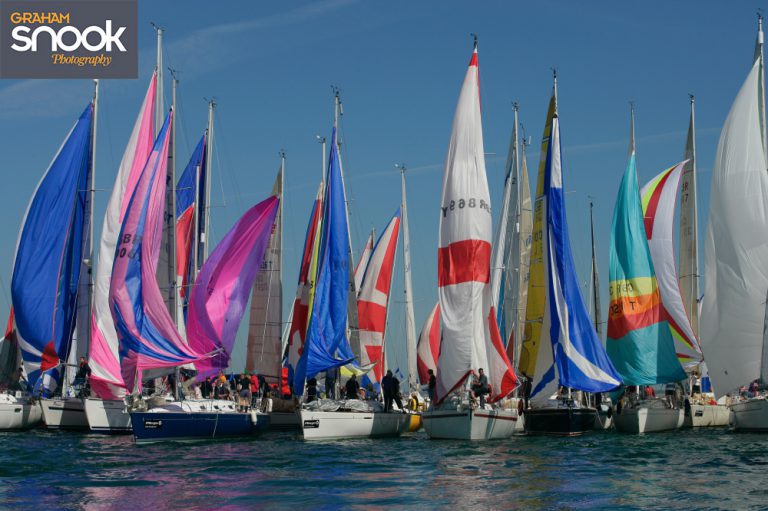 It’s Friday, so time for a Friday photo and the story behind it.

The Round the Island race is one of those annual events when, to be honest, it’s hard not to take a nice shot. Over 1400 boats usually take part in the race around the four corners of the Isle of Wight. From the start, off Cowes, with the sun coming up in the east there are lots of moody silhouettes to shoot. If the wind is in the right direction for some spinnaker action, getting downwind to the west of the boats will have the sun lighting them like colourful Chinese lanterns. Shooting from behind the boats, to the east, has the sun lighting their crews in the warm coloured morning light as they head west towards the Needles.

The date of the race is timed to give the competitors the best tides to get around the island. Carrying the ebb from Cowes to get around the Needles before the flood starts giving those who made it past a good push east, and anyone left in the Solent foul tides. With the tide falling as they go past the Needles there are a couple of navigational challenges to get past. The first one is only really for those with local knowledge to worry about. Goose Rock, about 60 feet from the lighthouse, a route not for the faint-hearted. The second is much more common – the wreck of the Varvassi, a cargo ship that hit the Needles Rocks on Jan 5th 1947. Because it’s low water these obstacles come closer to the surface and are easier to hit if you are unsure of their position. Although it’s well known about there will still be a few boats that give the Varvassi a clout on the way past.

This pic was taken on the 2006 RTIR. For it, I was in a RIB just above the wreck. The seaweed on the boiler stack of the wreck clearly visible flowing southwest to sea with the tide as it was running out. The fleet was passing us while Sam, my RIB driver for the day, did her best to dodge boats and keep us off the Varvassi. The yachts were well spread out, but the breeze had dropped to a zephyr, and the tide was about to change. Things were about to get interesting.

Then, exactly on cue, the tide turned. The weed on the boiler of the Varvassi slowly swung around 180 degrees, flowing northeast towards the fleet. The yachts were spread wide across the Needles channel, trying to get past the white rocky headland. As the tide turned they started going very gently backwards. The yachts at the back had what little breeze there was, so they were holding their ground. The yachts at the front had no wind and were being taken into the boats behind.

What had been a relaxing sail in warm sunshine and light winds then turned into a frenzy of locker lids opening and shutting, fenders being passed around, and shouts here and there of struggling crew members needing a hand to fend off. Some owners realised their race was over, put their engines on and motored out of the chaos. Others held doggedly on. With the RIB now motoring astern we held position over the Varvassi getting the photos.

I took hundreds of photos that day, but I like the colours and confusion of this shot. Never before have I seen so many boats so close to each other, not connected by warps. And I doubt I’ll ever see it again.

Behind the scenes
Round the Island Race Yachting Photography
Keeping a lens clean – The best lens cloth?
What is a tilt / shift lens and why use one?
I can supply photography, 360-degree tours and video to promote your company and help you sell more
Contact Graham
+44 (0) 7966 469186
graham.snook@grahamsnook.com
© Graham Snook Photography 2022
Privacy Policy
We use cookies on our website to give you the most relevant experience by remembering your preferences and repeat visits. By clicking “Accept All”, you consent to the use of ALL the cookies. However, you may visit "Cookie Settings" to provide a controlled consent.
Cookie SettingsAccept All
Manage consent