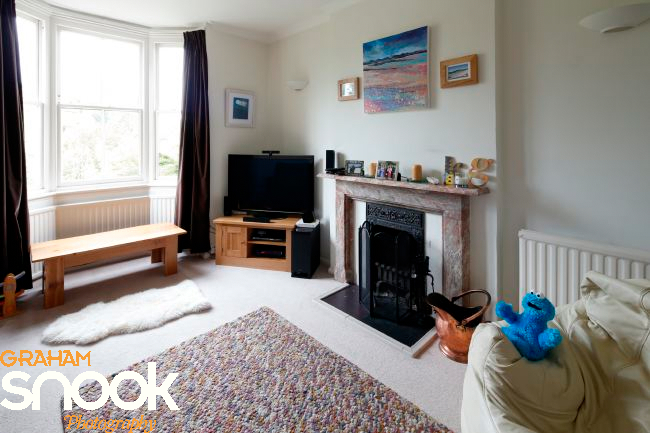 Why buy a tilt-shift lens?” the journalist opposite me asked. We were enjoying a very nice meal overlooking the harbour in Palma, and I was explaining how my own kit was superior to the kit I had been using for some time. He knew the principle, but without images, it was trying to describe colour to a blind person. So I’ll run down why I felt it was necessary to invest in better equipment.

Take this image below, it looks nice enough, but architectural photographers would be cringing. Why? The fireplace isn’t that bad…Actually, it is, but it came with the house and it’s been replaced by something more in keeping with the property, but I digress. No, the problem is with the vertical lines of the room. If you were actually in the room all the lines from the floor to the ceiling would be parallel. But in the photograph, they are not.

Why not? Well in order to get the floor in, I’ve had to lean the camera forward…Look at the way the windows and chimney breast have gone wedge-shaped. These are “diverging verticals” as the vertical lines will never meet and are getting further away above the frame. If you photograph a tall building and tilt your camera upwards the opposite will happen (converging verticals).

In the, now, wonderful days for the amateur photographer, they can correct these optical errors in photoshop in a few seconds, but the result is a narrower angle of view as the image would have to be cropped to be published

So instead of resorting to software to correct at a later stage, the film plane has to be vertical, and parallel with the walls, but if we look at what happens when I do that…

So, what’s the solution? Buy or hire a tilt-shift lens. Which, as well as doing the fancy out-of-focus little-bit-in-focus stuff, can also do what’s known as drop front. What this does is move the lens downwards while the film/sensor stays where it is. By doing this it moves the centre of the projected image on the sensor downwards (remembering that the image is projected onto the sensor upside down and back to front) so what you really see is more of the bottom of the image…like this:

The lens can also do far more interesting things, but I’ll save those for another day – and yes the fireplace really has gone now.

Hints and tips
Interior Photography
Photographing the Round the Island Race in no wind
Photographing on board Mariquita
I can supply photography, 360-degree tours and video to promote your company and help you sell more
Contact Graham
+44 (0) 7966 469186
graham.snook@grahamsnook.com
© Graham Snook Photography 2023
Privacy Policy
We use cookies on our website to give you the most relevant experience by remembering your preferences and repeat visits. By clicking “Accept All”, you consent to the use of ALL the cookies. However, you may visit "Cookie Settings" to provide a controlled consent.
Cookie SettingsAccept All
Manage consent