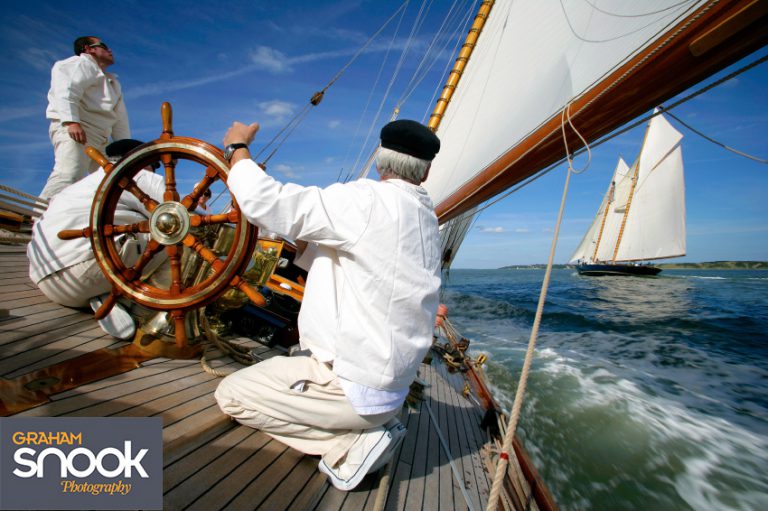 It’s Friday photo time again, but this time it’s Monday, the joys of a baby daughter with tonsillitis! One of my most memorable and enjoyable days with IPC was a shoot for Yachting World magazine on board the 19-metre class Mariquita. Not only is she stunningly beautiful to look at from the water, on board she oozes quality. I joined her with Jonty Sherwill for the 2008 Cowes Classics Race around the Isle of Wight. Unlike the annual Round the Island race which sets off in an anti-clockwise direction from Cowes, the Classics race goes in a clockwise direction. It was an early start and the winds were light, but the sun was out, and it was a privilege to be sailing on such a beautiful boat that morning.

As we were leaving Cowes, Jonty asked Jim, the skipper, how much she drew, as if to answer Mariquita gently bumped the bottom at the mouth of the Medina River “Just more than we have at the moment” replied Jim with a smile. Tide was rising as we were going slowly in preparation for hoisting the massive sails. Teamwork was the order of the day for the hoist, the crew assembled in a line, all dressed neatly in cream cotton trousers and pure white smocks. Just modern Oakley sunglasses gave the modern date away.

It was a downwind start, then away to the east. With no guardrails, and just a six-inch high toe rail to keep your feet inboard the risk of going over the side was ever-present. I moved cautiously around, shooting the onboard action in a reportage style, telling the story of the day. The wind was light, the sun was out, but in the shadows of her towering sails, it was decidedly chilly. It wasn’t until we gradually hardened up to go south that the warmth and light of the sun brought out the colour of the teak, varnish and brass on deck.

As we rounded St Catherine’s point the wind started to build, as Mariquita heeled more of her deck would duck under water, and the odd wave would sweep along the leeward deck, it was not the place to take photographs, but the crew still had work to do on the leeward side. I was up at the mast taking photographs of the crew working up to their thighs in water as the breeze built, then I headed back to the companionway to do a few more shots from a different angle, looking forward. Everyone was enjoying a tacking duel with Mariette, the big blue schooner in the photograph above, and Mariquita was slowly but surely over-hauling her on the way upwind toward the Needles. While I was shooting, one of the deck sweeping waves took one of the crew off their feet in front of me, I remember seeing his canvas hat go by under the water. In no time Mariquita’s ever-present support boat plucked the soggy crew member out of the water as Mariquita’s crew eased sheets and slowed the majestic yacht to a standstill. While the crew member was being safely returned, Mariette had romped off, the chase was back on.

After rounding The Needles Mariette was still ahead of us, but on the last leg up the Solent towards Cowes, the crew of Mariquita were catching her up. I used a slow shutter speed of 1/60th of a second to get some motion blur on the water rushing by. I don’t usually use slow shutter speeds on the water because there is so much movement that any images captured usually have what looks like camera shake. To minimise the effects of using a slow shutter I opted for a 17mm wide angle lens which also enabled me to get more of the scene in.

This was actually my first time sailing around the Isle of Wight because most of the time I’m on a photo boat shooting, rather than sailing. During the Round the Island Race, I usually follow the fleet to The Needles, and head back to Cowes to post photos online before jumping back in the RIB to capture the winners coming up from Ryde. My day on board Mariquita was incredible, she really is a beautiful boat, but there were times during the day I wished I was on the photo boat to capture her beauty, not that many times though.

Behind the scenes
Classic Yachts Round the Island Race
What is a tilt / shift lens and why use one?
Getting the right exposure: What is the correct exposure?
I can supply photography, 360-degree tours and video to promote your company and help you sell more
Contact Graham
+44 (0) 7966 469186
graham.snook@grahamsnook.com
© Graham Snook Photography 2023
Privacy Policy
We use cookies on our website to give you the most relevant experience by remembering your preferences and repeat visits. By clicking “Accept All”, you consent to the use of ALL the cookies. However, you may visit "Cookie Settings" to provide a controlled consent.
Cookie SettingsAccept All
Manage consent