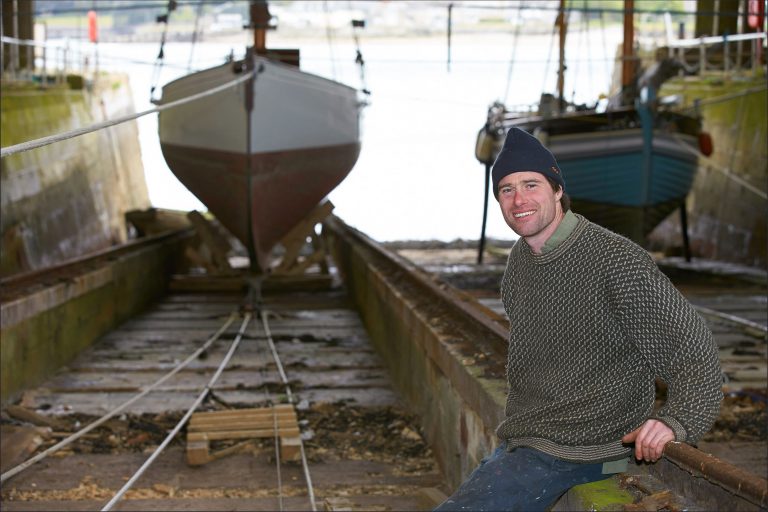 One of my reasons for moving on from Yachting Monthly was that I wanted to photograph other things. As much as I love modern boat design, [cliché alert] they don’t make them like they used to. Well actually they do, but not in the numbers of mass-produced GRP boats. My job last week took me down to Stirling and Son in Plymouth where Will Stirling is building, repairing and crafting beautiful wooden boats out of a cold windy shed that covers a 250-year-old granite slipway in the heart of Plymouth’s Naval Dockyard.

Will also has that rare quality, adventure, the quality sometimes mistaken for madness. He’s set himself a challenge to sail around every offshore lighthouse in Britain. He’s already sailed around the Eddystone, and across to Jersey in preparation for the ten-year plan. Just one thing Will will be doing this in one of his own boats, one of his smaller boats.

It’s in build at the moment, and he’s learnt from his trip to Jersey that his boat needs to be a little longer, so he’s increased the design by a foot. Making her just 15 feet long. The extra foot will give him and his crew more room, and hopefully, he’ll be able to lie down and stretch out now.

Photography
Photographing the Fabio Buzzi FB80
Keep the horizon horizontal
I can supply photography, 360-degree tours and video to promote your company and help you sell more
Contact Graham
+44 (0) 7966 469186
graham.snook@grahamsnook.com
© Graham Snook Photography 2022
Privacy Policy
We use cookies on our website to give you the most relevant experience by remembering your preferences and repeat visits. By clicking “Accept All”, you consent to the use of ALL the cookies. However, you may visit "Cookie Settings" to provide a controlled consent.
Cookie SettingsAccept All
Manage consent