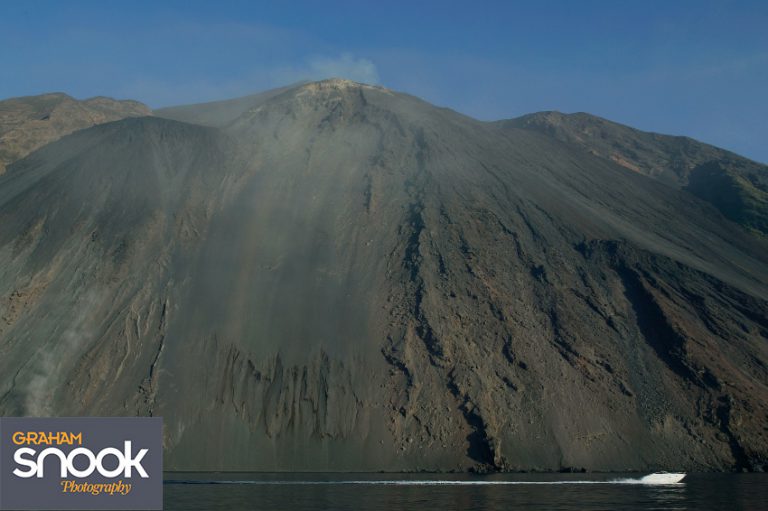 This time my Friday photo is back in it’s normal place. This photograph of the Sessa Islamorada 32 dates back to 2005 and features Stromboli, the big black active volcano north of Sicily.

I love jobs in Italy, there is always an element of unknown to them. Turning up to test a boat, one would hope the boat would be finished. To be fair to Italians this does happen in other parts of the world to, but most of the time it happens in Italy. You arrive at 11am and before you can see the boat, you’re taken for a strong espresso to shake you awake from your 5am departure. After a coffee and a chat, it’s then lunchtime.

Now Lunch in Italy is great, it’s a real social event, and as such, it shouldn’t be rushed, especially if you have a boatyard of overall-clad workers trying to finish building the boat in the midday sun. About 14:30 we might get to see the boat from a distance, by 17:00 the interior might be ready to view, but it still might not be finished until the next morning when our flight usually leaves in the afternoon.

Luckily this shoot with Sessa was going to plan, we were there to test their new C52. With past experience of their county’s boat builders in mind, we booked two nights away. On day one we arrived and were taken to the (finished) boat where I was able to shoot the interiors before waiting for the evening light. We went out and got some really nice shots with the sun low in the sky, before we were driven to a restaurant in the mountains, of Sicily.

The Godfather Waltz was playing in my head for the hour it took to get there, the bottle of Corleone wine did nothing to quieten it. We sat in the midst of smart darkly suited Italian gentlemen. There were some ladies there, there must have been, but my memory fails me, lots of big black expensive cars, and lots of men in dark suits, a cracking steak, with the bottle of red that shared its name with one of the famous movie gangsters of all time.

The next day we were able to get more shots, but by lunchtime, I had all I needed of the C52. The shoot was taking place around the small chain of beautiful and dramatic volcanic Aeolian islands, inshore the water bobbed with bits of floating pumice. We stopped for lunch a pretty fish restaurant. It’s always fish, great for a yachting photographer who doesn’t see eye to eye with scaled food. I’ve been to, what I’ve been told are, some of the best fish restaurants around, only to ask for a steak!

After lunch, I jumped on the Sessa C52, and my colleague, Carl, swapped to the Islamorada 32 to test that while I took the photos for the second boat test. As the afternoon drew on we stopped for shots in an anchorage in Panarea before heading on to the most northerly of the islands, Stromboli. She was smoking, and active, not dreadfully active, but a smoking volcano is a smoking volcano. We ran along the south coast of the island which was in shadow, before heading around the eastern tip to shoot on the Northwest coast in the warm evening light.

As we got closer to the arid side of the island, red hot volcanic rocks could be seen rolling down the side of the volcano, disappearing with a splash and a plume of steam. This was a little too close, so we moved offshore a bit while the Islamorada did a couple of runs with the spectacular volcano rolling rocks and leaking a cloud of pungent sulphurous gas as we passed by. On the left of the photo, you can see the dust trail left by some rocks, and in the water left of centre it’s possible to make out a splash or two. The volcano was a black giant and I wanted to show the contrast with the small white Sessa.

Thankfully the shoot finished with two boat tests in the bag, a great selection of images, and a bottle of duty-free Corleone to take back home and drink in front of a movie. The Godfather anyone?

Behind the scenes
Motor Boat Photography Sessa
Getting the right exposure: What is the correct exposure?
The simplest way to improve a photograph
I can supply photography, 360-degree tours and video to promote your company and help you sell more
Contact Graham
+44 (0) 7966 469186
graham.snook@grahamsnook.com
© Graham Snook Photography 2022
Privacy Policy
We use cookies on our website to give you the most relevant experience by remembering your preferences and repeat visits. By clicking “Accept All”, you consent to the use of ALL the cookies. However, you may visit "Cookie Settings" to provide a controlled consent.
Cookie SettingsAccept All
Manage consent