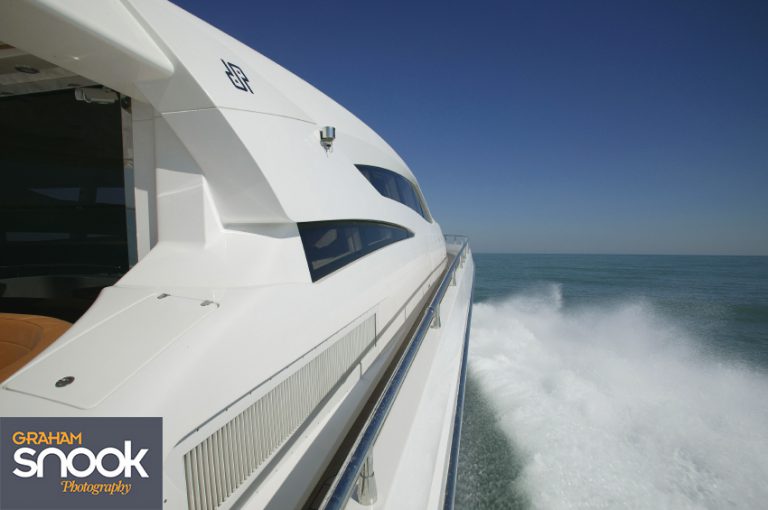 Ah Venice! Pizza San Marco, the Doge’s Palace and gondolas. I’d been working for IPC for 6 years, and while I’d been to Venice airport a few times I’d never made it into the city. I’d seen the iconic St Mark’s Campanile pass by on the horizon, but the airport was the closest I had got to this beautiful Italian city. Until 2005, when I got to test the Dalla Pieta 80 with Motor Boat and Yachting. We arrived at our hotel, which by usual standards was very nice, too nice in fact. Well furnished, with views out over Venice lagoon. Out of season at the beginning of March, it was an expensive room in an expensive hotel. We didn’t usually stay in hotels like this.

I met a rather worried-looking Dave Marsh in the lobby before heading to the factory. In the car ride to the factory, we established there had clearly been some mistake. Dave has asked Dalla Pieta to book our rooms, when asked about our budget Dave had replied “about eighty to a hundred Euros a night”, thinking that it might be possible to get two rooms for forty to fifty euros a night. However, Dalla Pieta was clearly used to dealing with clients whose pockets were deeper than ours, and it’s possible they heard €200 as what had actually been booked was a €250 room. Each. For two nights.

Although it was cold, the sun was out when we arrived on board late in the afternoon, too late to go out that day. So I shot the interiors, while Dave poked around in the places of the DP80 that only boating journalists and yacht designers are interested in.

We returned to the hotel and were taken to a beautiful Italian coffee house on the edge of Piazza San Marco, the evening was drawing in, and plans were made for dinner. Dalla Pieta had booked a restaurant for us.

With the mistake of the hotel still raising a grin on my face, I was looking forward to seeing the restaurant. Again a very nice Venician restaurant, tucked away in the back streets, off the tourist route. A mine of gastronomic and fermented-grape treasure. One look at the wine list showed we were well out of our financial depth again, bottles topped off at €2,500. Dave asked for a recommendation of something smooth, rounded and red, the waiter pointed to a €200 bottle of something fine. Dave explained, “Sadly, we are just poor journalists, do you have anything a little more, reasonable?”. “Of course sir, how a bottle of this?” he said pointing to a €120 bottle. Dave looked sad and said “more reasonable still”. “This?” questioned the waiter, Dave “more reasonable?” the waiter gave a slight wince, before finally pointing to another bottle that was €40 and explaining that that was the most “reasonable” bottle they could offer.

The wine was good, the food was beautiful, the atmosphere in the restaurant was enchanting. We looked over to an English couple dining a few tables away. The man had ordered steak tartare, and the waiter was preparing it at their table with flamboyance. At the end, the waiter finished and wafted away into the shadows.

“Is he coming back?” said the man

“Why?” enquired the woman

“What? Well tell him then, he’s probably forgotten to cook it”

The waiter was called back, he politely explained that it was steak tartare that had been ordered, “but if sir would like it cooked it would be no problem at all”.

The next morning the sun was flooding across my balcony, creeping under my curtains. It’s always nice to wake up to the sun on the day of a shoot, especially when February was only a few days behind us. The shoot went without a hitch, no wind plenty of sunshine and a DP55 as a photo boat. Although it looks warm and sunny, I was in full oilskins trousers, gloves and a jacket in an attempt to keep the cold at bay.

Buoyed with a successful shoot in the bag we got a taxi to the airport. I’d wanted to get a water taxi, but with the budget in pieces already, we went for the cheaper option of a car. As we were driven to the airport the sky grew overcast, by the time we got into the departure lounge the sky was dark, then as our plane arrived it started to snow, and snow like I’ve never seen snow before. It was a pure white-out, all that could be seen outside was snow, no runway, no planes, just snow. It was piling up against the windows. In no time it had reached a couple of inches, then more.

Some flights were leaving as we were loaded onto the plane, and there we sat. Our departure time came and went, and still we were sat there. The pilot came on the radio and explained the runways had been closed because of the snow. So we waited for a couple of hours before the snow stopped. Not allowed off the plane. Sat, staring at the snow out of the window. The pilot walked through the plane chatting with passengers, keen to stretch his legs too. The snow stopped and the pilot informed us that Venice was in the process of clearing the runway and the plane would have to be de-iced – this takes about 45 minutes. With the plane de-iced we fastened our seatbelts eager for our impending departure. Sadly Venice had not cleared a wide enough path in the runway for this particular plane. So we waited, and waited. Then it started to snow again, and the runway was closed.

The de-icer only has a finite amount of time when it’s effective, around 45 minutes to an hour of snow time – After that, it has to be reapplied. It snowed for more than an hour. The runway had to be cleared again, the plane had to be de-iced again, then it might be possible to take off.

I’d waited 6 years to see Venice up close, but that day I waited 5 long hours to get away from the fish-shaped group of islands in the north Adriatic.

Behind the scenes
Dalla Pieta 80
Choosing a camera – What do I need?
How to release a stuck filter
I can supply photography, 360-degree tours and video to promote your company and help you sell more
Contact Graham
+44 (0) 7966 469186
graham.snook@grahamsnook.com
© Graham Snook Photography 2022
Privacy Policy
We use cookies on our website to give you the most relevant experience by remembering your preferences and repeat visits. By clicking “Accept All”, you consent to the use of ALL the cookies. However, you may visit "Cookie Settings" to provide a controlled consent.
Cookie SettingsAccept All
Manage consent